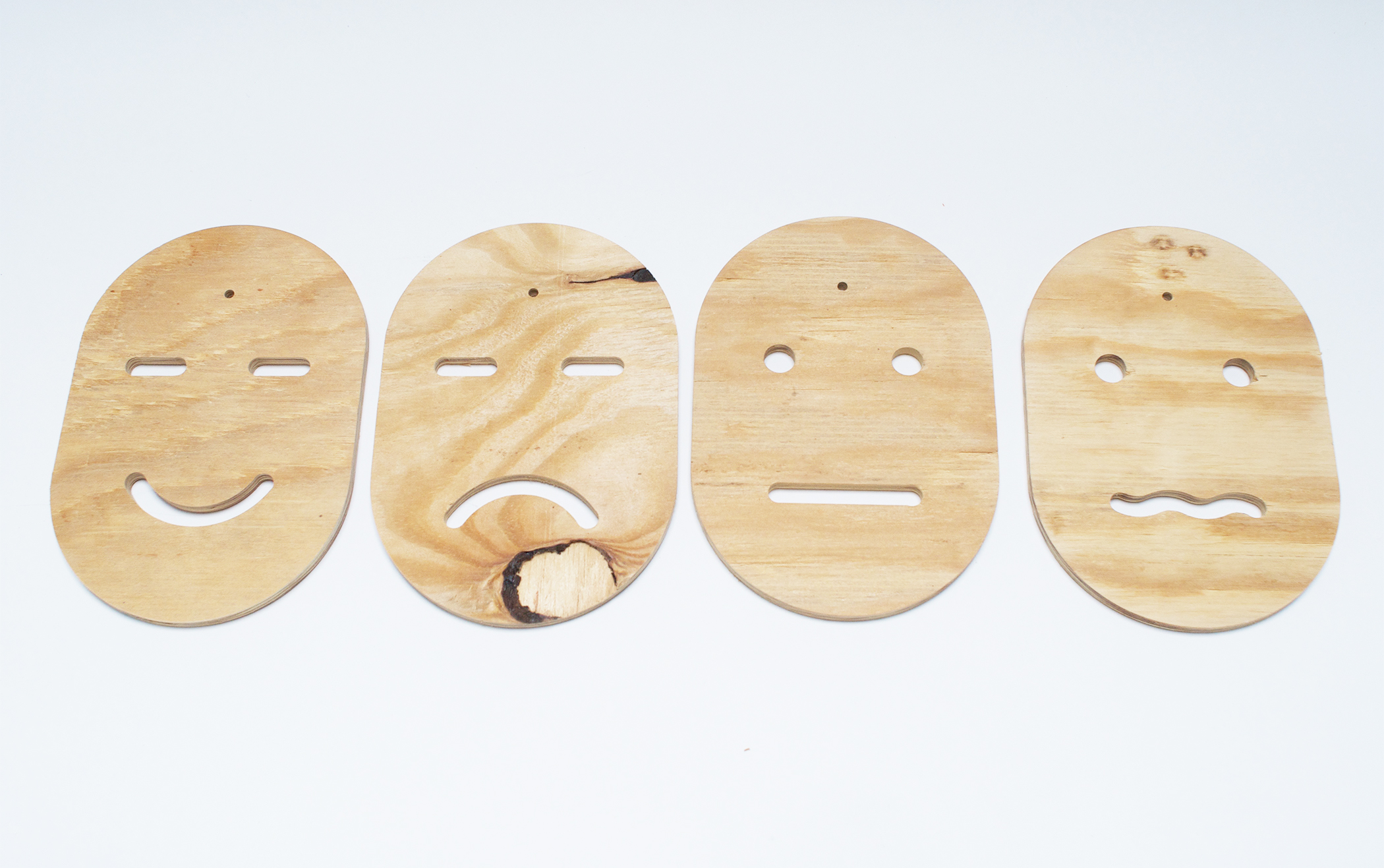 This interview is part of an ongoing series of conversations with the Areaware designers. We asked our Spring 2016 designers to pick someone they know to conduct an interview with them about their practice. The following is a conversation between Chen Chen & Kai Williams, designers of the Mirror Mask, and designer Brendan Timmins.

Brendan Timmins: When did you start working on the mask project?

Chen Chen: In 2013. Before that we’d only been working on super weirdo stuff. We didn’t really think about products in terms of its ability to communicate with the viewer.

Kai Williams: It was really concurrent with the stone fruits. When we started working on this it was about efficiently using the CNC machine. The original masks were cut out of wood, and were about the texture of the wood and seeing things in the texture of the wood, but also using the machine efficiently. That is why the current lines on the mask are a half inch in width, because the cutting tool is a half inch router bit. 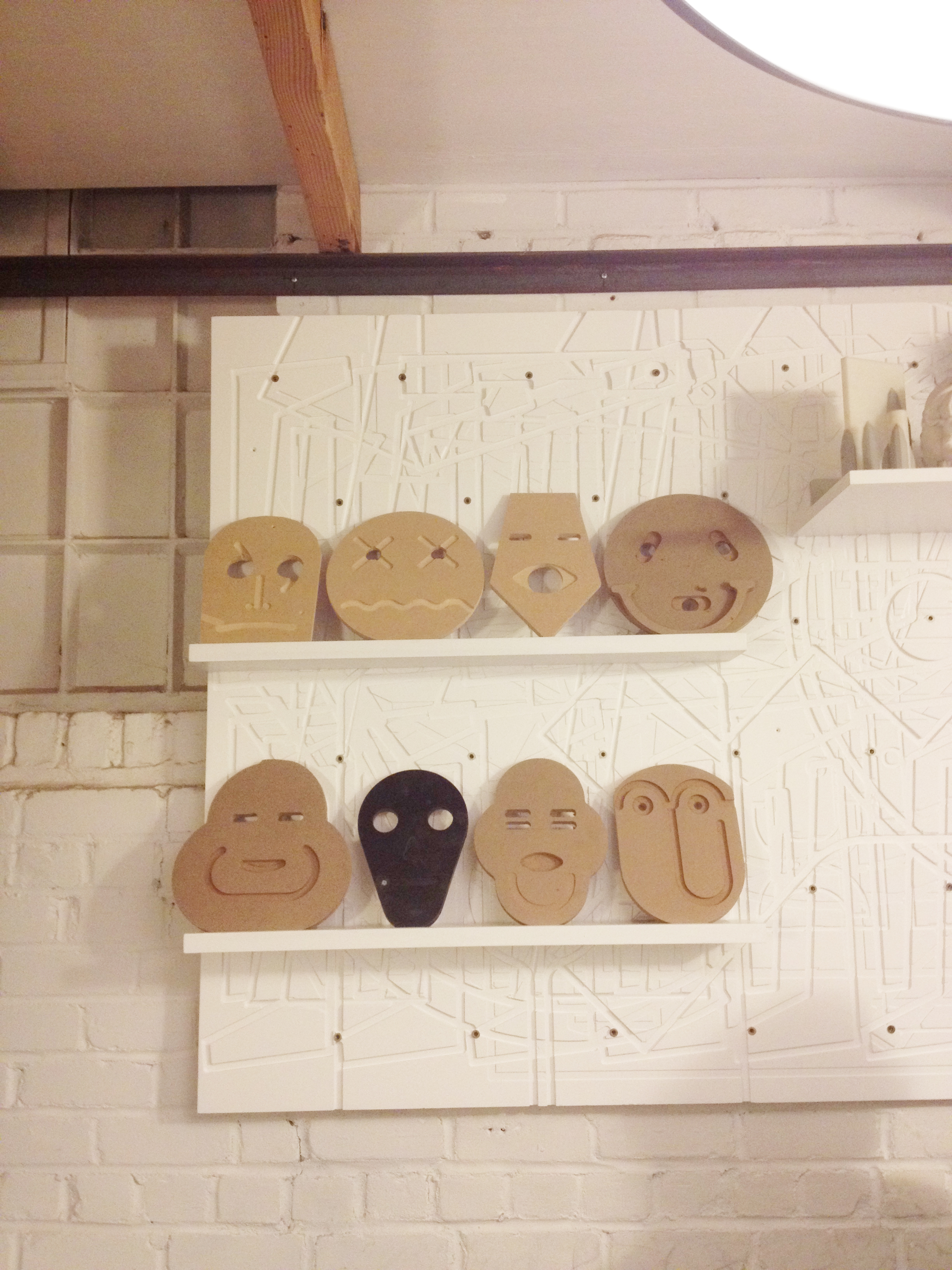 B: For me, working on my own as a designer, there are a lot of things I’m envious about having a partner to bounce ideas off of. What are things you guys look to each other for?

Chen: In the beginning, we didn’t really talk about how we were going to split responsibilities. I think within the last year it has become a little bit more defined. Kai handles some of the more technical vendor facing stuff. He researches how things are going to be made and what is plausible. I’ve been working more or less on how the products will be sold, how to commercialize strange experiments, sales, etc.

Kai: Actually designing is a very, very small part of our day. It could even be a sentence spoken between us. Usually it will be one of us pitching an idea, or sort of riffing on an idea, and then we’ll come back with a prototype, and then the other person wants to take it in another direction. I think a lot of our ideas actually come from also working on other projects that are not product related.

Chen: The things that really interest us are not things you can arrive at by being like, “I need to design this. Let’s design iterations and improve it.” Everything is almost so obvious; it’s like you have a flash of inspiration and you realize something obvious that somehow hasn’t been made yet.

Kai: Maybe we order a coating for a certain spec, and it turns out to not work in the way we thought, and then we just try to figure out how it’s used best.

B: Do you guys feel like, in terms of the resin or the dripping foam stuff, that you were on the forefront of a movement that is a bigger thing happening now in terms of materiality, for a lack of a better word “goopiness”? 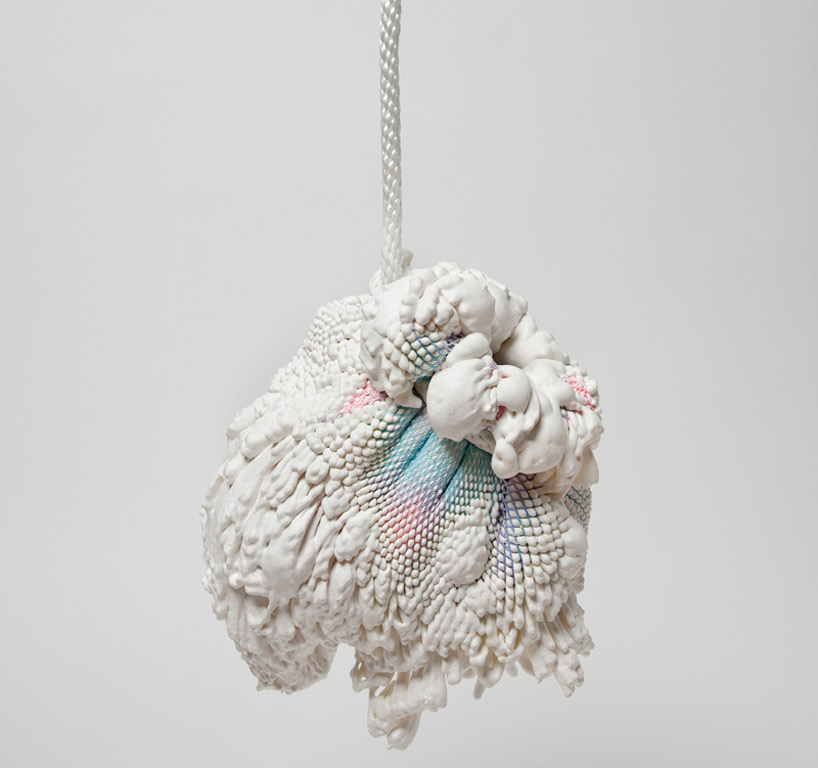 Chen: I think in a way, maybe we were a little earlier than people doing that, just by the fact that there weren’t that many studios making smaller stuff, period.

Kai: That’s true. Also, Chen came from a background that was very much Moss influenced. They’ve had a history of goopiness going back through the 60’s and 70’s. I don’t think those things are new things.

Chen: Yeah! For example, I didn’t really like Gaetano Pesce the first time I saw it. Only through repeatedly interacting with those types of pieces working at Moss over the years did I gain an appreciation for it. it’s not the most immediately consumable idea. Everything is riding this line of almost ugly, which is not very digestible for a lot of people.

B: Is that something you guys appreciate, in relation to your own work? Do you appreciate someone being like, “I hate that thing”?

Kai: I think, in any design, you’re going to have people that like it and don’t like it. What is interesting to us is when an attraction pushes past that ugliness. You see this thing, and you’re like wow that’s ugly, but I want to look at it again. I want to come back to it, because there is something interesting about it.

B: I see a bigger conversation happening in which it seems you guys really reopened the door.

Kai: One of the things that drives our work is that we do have a big studio, physically. A lot of the times, we can experiment on this cross-material thing. After a while, it becomes too big to grasp all of the options you have, but it’s very easy to make a prototype out of several different materials.

Chen: In the beginning, the materials we had access to were super limited, and that’s part of what’s driving a lot of the earlier innovative ideas. You have a budget of 10 dollars, so what are you going to make out if this thing? As our wallet has grown a little bit, so has our access to other options.

Kai: Early on we had like, 3 materials that we could try in 9 different combinations, so we just tried all of them and saw which one works the best. 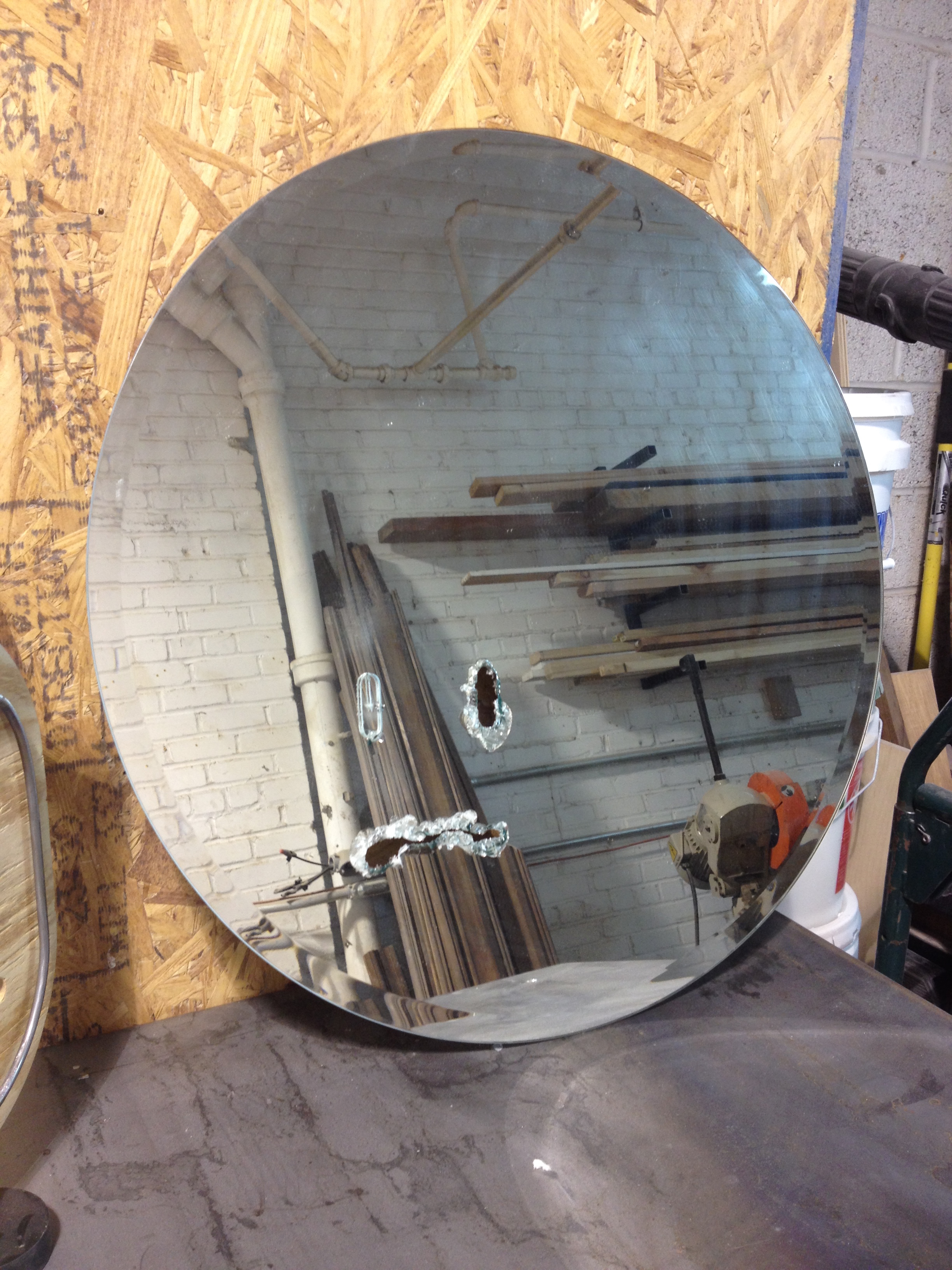 B: What is your favorite way that you’ve seen your work presented?

Kai: There was a list of designers on the website and we just happened to end up next to him.

Chen: I think the first time I was putzing around in the Moss computer sales interface, and I saw my name next to Charles Eames as a vendor, that was pretty crazy! (Laughs)

Kai: In a physical context, I think… sometimes you just see your stuff on a shelf next to some other objects you really respect and it just feels so good. 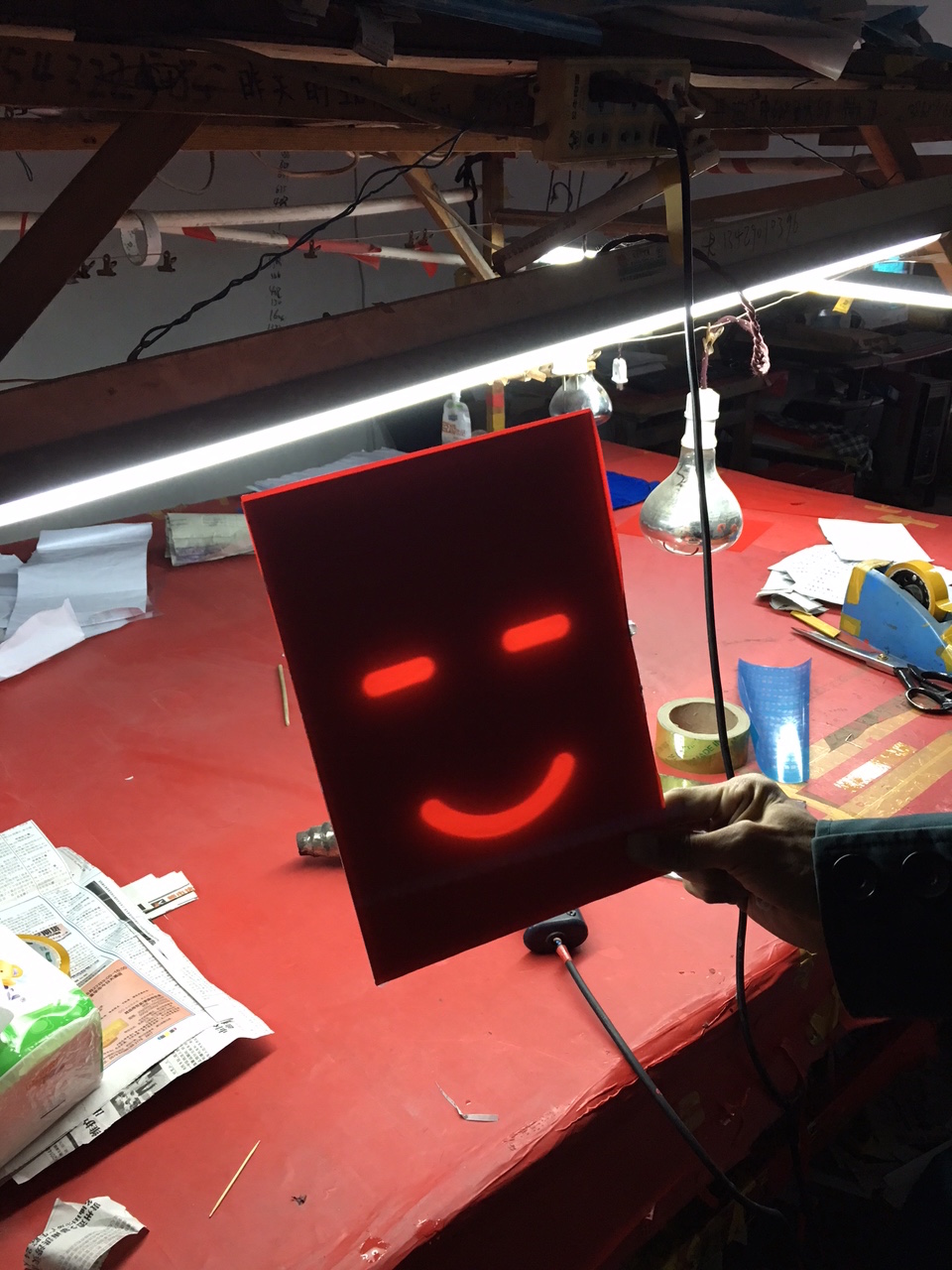 B: You guys are able in a way, while you work primarily in design, to cross into the art realm. I wonder if walking the line is something you guys are cultivating, or if you are even worried about context.

Chen: I think our idea of industrial design when we were going to school was a very traditional approach. Then you get out of school, and you realize unless you’re working for a company, traditional means of production are really inaccessible when you’re first starting out. When you have no money you can’t have molds made, you can’t have tooling done, so yeah, you end up, working in a way that is more hands on and less industrial.

Kai: They have to be one-offs. Everything is a one-off because you’re making it yourself.

Chen: We’ve always thought of everything we’re making as functioning products. I don’t think we ever thought of the works as art or sculpture, but I guess by it’s nature, it’s sculptural.

Kai: I don’t think we actually do ride the line that well. I think a lot of other people make work that is less functional and more artistic. I do believe presenting the work is really important. It’s always more interesting to try to present it in an art relation instead of a design relation, which is often very boring.

B: Have you guys ever written a statement about what you do?

Chen: Not really. It’s difficult to crystallize those ideas.

Kai: We’ve been talking about that recently, about trying to define what we do. Mostly, we’ve spoken through images of our work.

B: We’re in a certain time in the world where a strong image can get you far. For instance the Budweiser Nun chucks; not a lot of people saw the object you made, but everyone saw the image of them on the internet. So in a sense, is your work somewhat based in the image world? 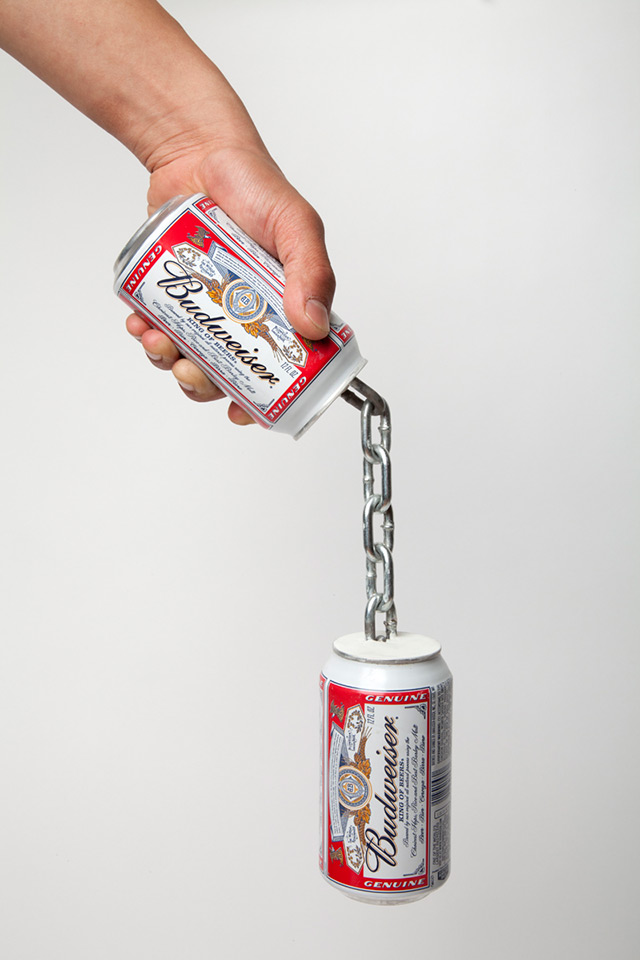 Chen: Yeah absolutely! I think to a large degree it was this happy meeting of us and our photographer who shot everything when we shared a studio with him. He just shot some of our work last week. To have image continuity across the past five years, is incredible to have that consistent documentation of our body of work.

B: Is the image equally as important as the object?

Chen: Yeah definitely, because that is the primary method of dissemination right?

Kai: It absolutely is.

B: Can an image be a design object? 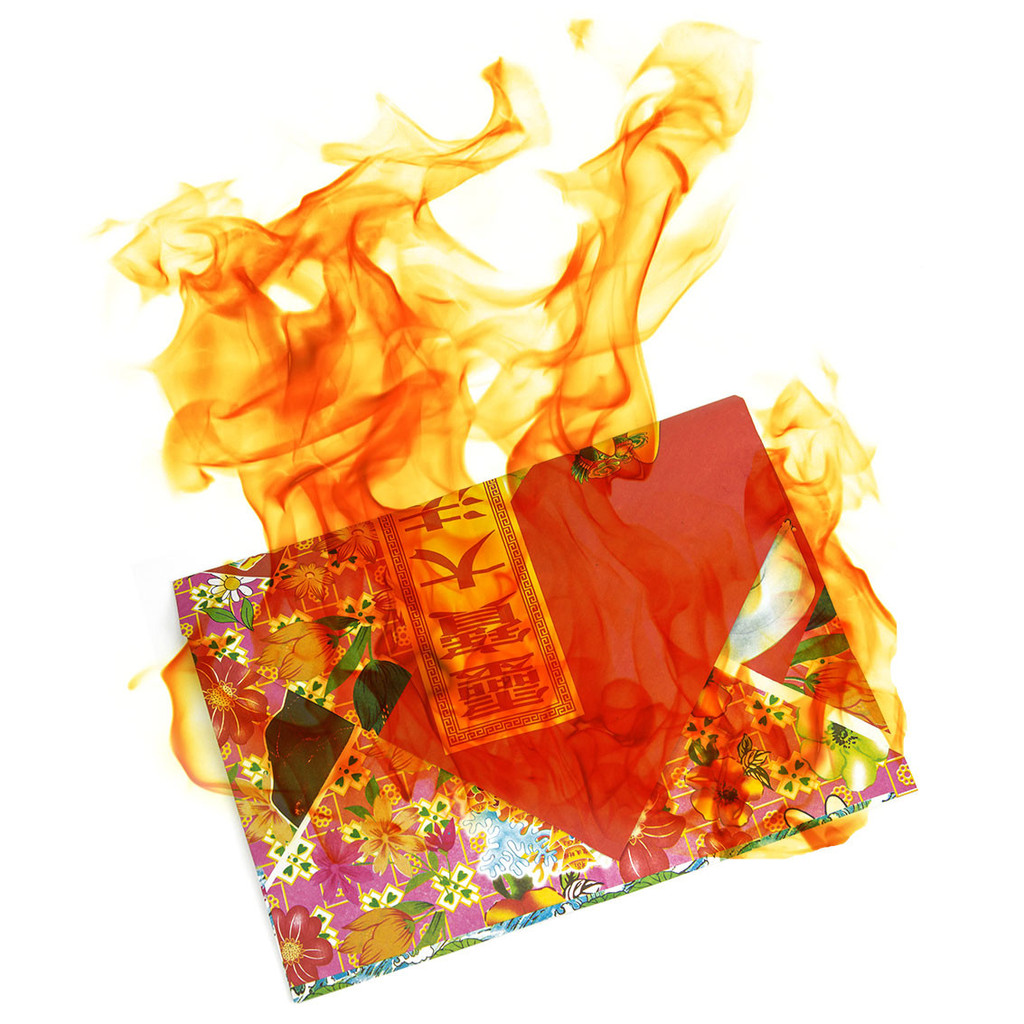 Chen: We did the joss posters for the Walker Art Center, for a project where we had to make an intangible product. We knew most people were going to do something digitally or experientially related. That’s not something that we normally do, so, we made a poster print of our products that you are meant to be burned as an offering for your ancestors. In that case, the image is the product.

Kai: Also, going back to the Bud Nun Chucks, they’re not a product, they’re just an idea. And the image is better than the product in almost every way. The next question for me is “Is this a direction that we should keep on going in, or is there a limit to what the image can tell?” I think we’re going to start adding some words to verbally define our objects.

Chen: The way we’re working is evolving. We’re now mass producing things, and, with that decision, it changes your design aesthetic. You have to design things a factory can make. In a way, the new product will look a lot more like traditional objects.

B: That’s something that an interesting new facet of how you guys work.

Chen: It’s really difficult to scale a practice that's based on handmade, labor intensive compositions. You can only scale production so big doing that. The reason we went to school for industrial design is because, in the end we wanted to make every day objects that you would use. B: One thing I constantly think about and ask myself when designing is, “Why am I making this? What compels me to make this thing?” Is that something you guys ask yourselves when you’re working through an idea?

Chen: Yeah. I think a lot of why is just that I’d like to see this cool thing realized.

Kai: And we hope that other people feel the same way. That really is the why.

Chen Chen was born in Shanghai, China in 1985 and immigrated to the US at age six, arriving in Laramie, Wyoming.

Kai Williams was born in midtown Manhattan in 1984 and grew up living in Carnegie Hall.

Brandon Timmins is a producer of semi-functional aestheticized objects.