a conversation between Tim Parsons, Jessica Charlesworth
and Michael Savona 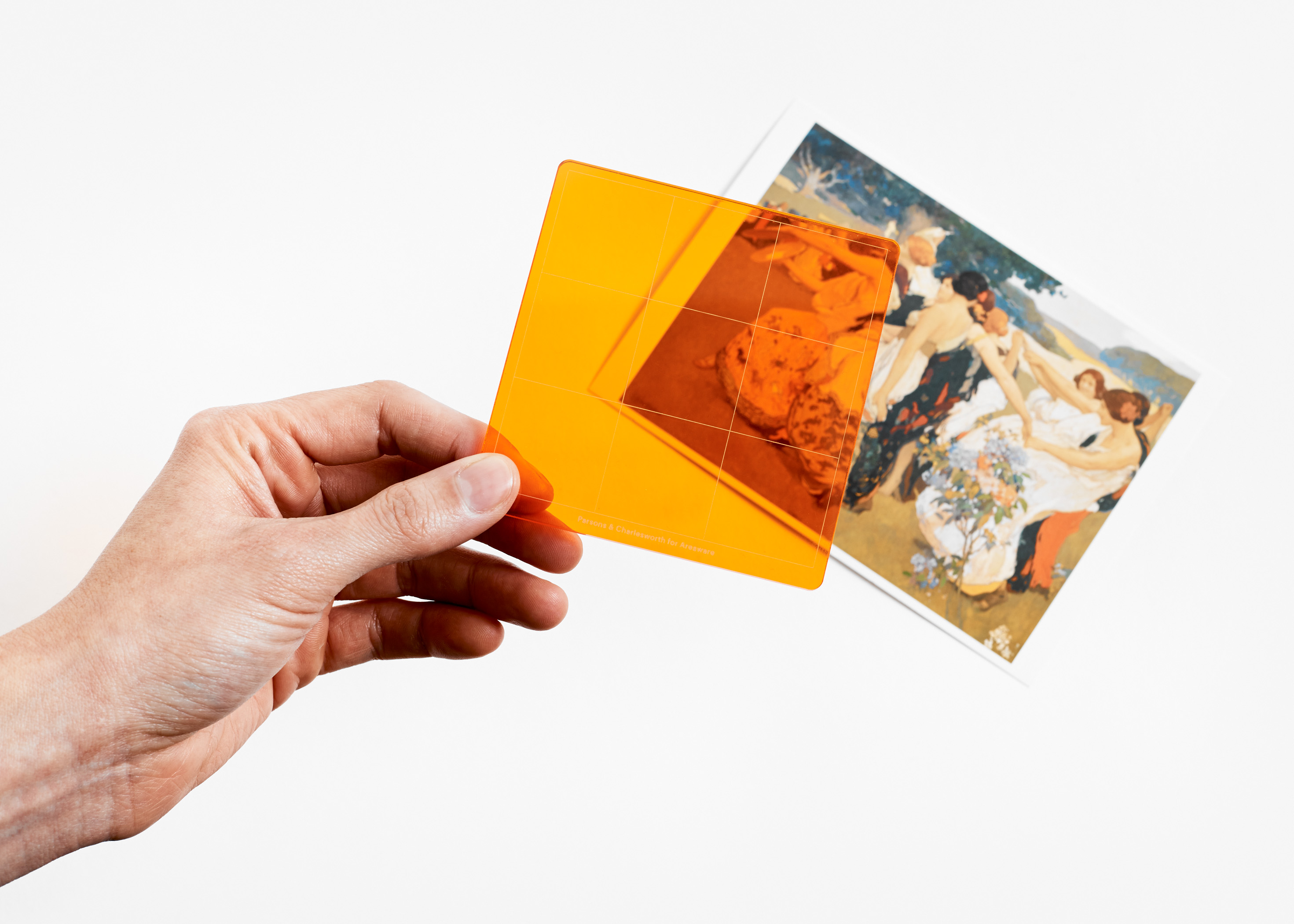 The Rule of Thirds Finder designed by Parsons & Charlesworth for Areaware

This interview is part of an ongoing series of conversations with the Areaware designers. We asked our Spring 2017 designers to select someone to conduct an interview with them about their practice. Designers Jess Charlesworth and Tim Parsons are interviewed by designer Michael Savona about the work they do as two different people. 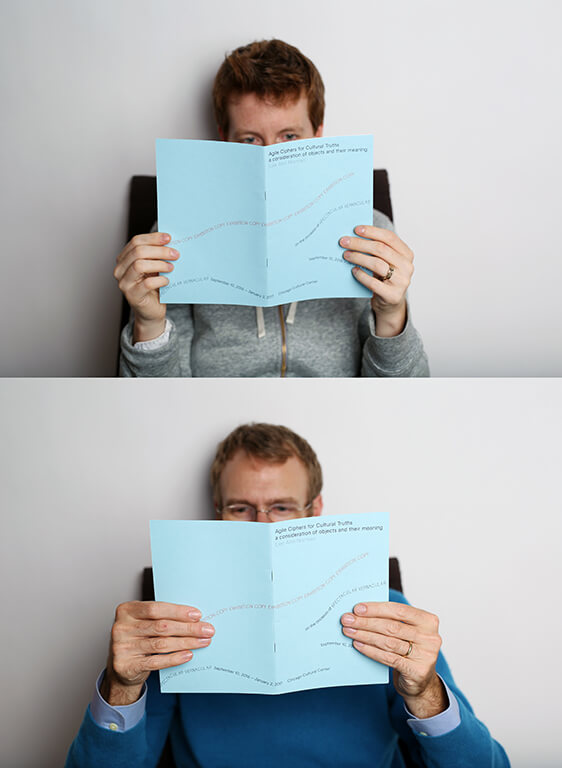 Michael Savona: I was just looking at my horoscope. Since we share the same birthday, Jess, I often look on both our behalves. On this site, I can choose to read yesterday, today's, or tomorrow's forecast. Sometimes I read my horoscope at the end of the day to confirm its truth...or in the scenario above, survey three separate readings to choose which day I was more—or less—Scorpio. This made me think of your work in a way. Obviously in the ways that you are thinking about futures and fictions, but perhaps more in the way you are shaping your practice.

You’ve gone beyond projects being a Jess-project or a Tim-project—your pieces are firmly Parsons & Charlesworth projects. But is there a P&C project? Do you like to move in and out of what a P&C project is? Is there freedom in this?

Jess Charlesworth: We’ve been trying to rephrase the language around what we do lately. “We design objects and futures” is something I wrote the other day. “Using narrative and speculation to prototype new ways of living, often proposing what does not exist yet and asking what if it did”. Trying to describe what we do together as opposed to separately.

M: Its nice that this comments about the things that are consistent in all of your work and kind of a grand ambition. Each object should perform to a certain standard. The Golden Section Finder in action

Tim Parsons: Whether something is to be used practically or whether it’s a speculative piece to be viewed in the gallery it still has to perform well. I think we are aware that when we are making things, each thing has its own context and that ends up determining how it’s made. If it is designed only to be viewed it does not have to have the same level of durability than if it is to be used physically and picked up, turned over and cleaned and kicked or what-have-you. It has a whole other level of use that is around its believability.

J: That's where the “prototyping ways of living” comes in. Prototypes by their nature can be mockups but also final versions of something that we have to test out in the real world ...whatever the “real world” is!

T: Going back to your question “Is there a P&C project?” When I think about that it makes me think more about the idea of the manifesto, the grand ambition, and we have not really laid that out. We don't have a mission statement, we don't have anything written down, it's something that has to evolve, whatever it is now is just a combination of both of our evolving interests and sensibilities. So I suppose I have become a bit suspicious of the idea of trying to write a manifesto, a very clear statement about what our ambitions are, because they have to evolve over time. Also, maybe it’s in reaction to when I was a graduate student when I used to write a lot of manifesto-like statements in my sketchbook. I think looking back at them they often seem a little naive. 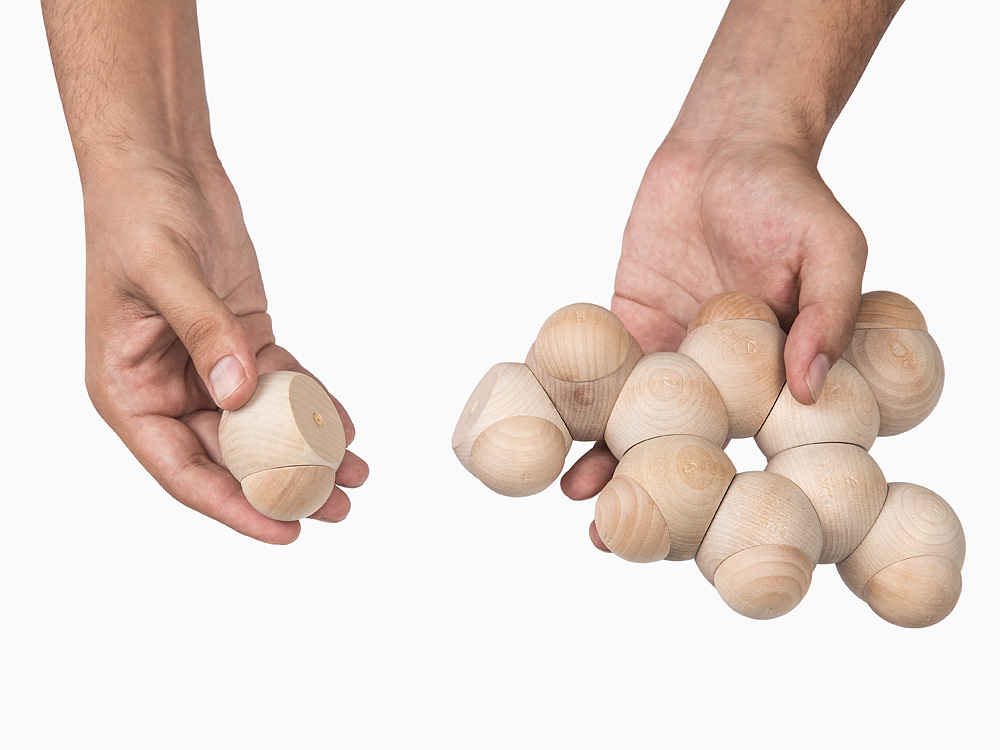 M: Are there moments of those that were still important?

T: Yeah it was a way to set out my values. But I suppose what ends up happening is that they are never able to completely encapsulate one's ambition. There are parts of those statements that are bound to still hold true but there are others that I think were too dogmatic. Design is such a constant mode of questioning your own beliefs and preferences so as soon as you write something down that suggests an aesthetic preference for one over another or if you are attaching a moral judgment to that, your brain starts to question it. It feels it has to be an amorphous evolving thing. 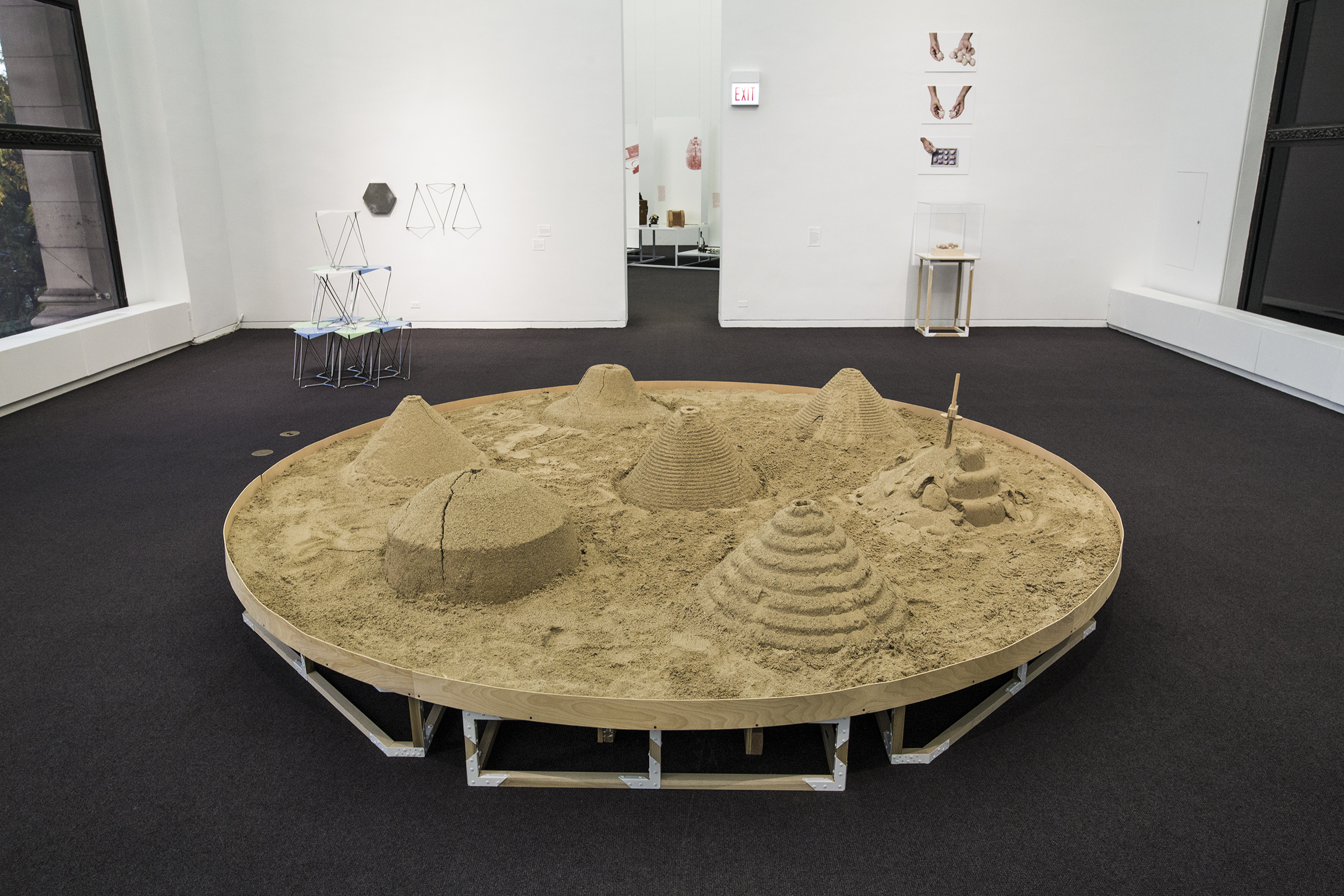 M: Some of these projects are in their 3rd or 4th iteration. There is a source but the sense that the source changes based on different input, maybe the form changes, maybe what started as an exercise becomes a commercial project. It’s like you are trusting that you've imbued these pieces with qualities and ambitions and there is a generosity in letting people experience them in new ways that lets them have a different life. Do you see the projects as whole objects or do they become moments that represent themes?

J: We always want our work to have a believable formal aesthetic that relies on the law of physics. We ask ourselves “If this was real, how might it look?” The MeMo project we did, they are objects that are not working products, but some of them could work, although some rely on technological advancements yet to be made. Our form language is evolving all the time as well. We don't have a house style, or at least it’s always evolving depending on what we are interested in. I think as a practice we have started reflecting on the show we had and what new things we want to do, asking ourselves “How has what we did, showed and talked about just last year changed our thought processes?” 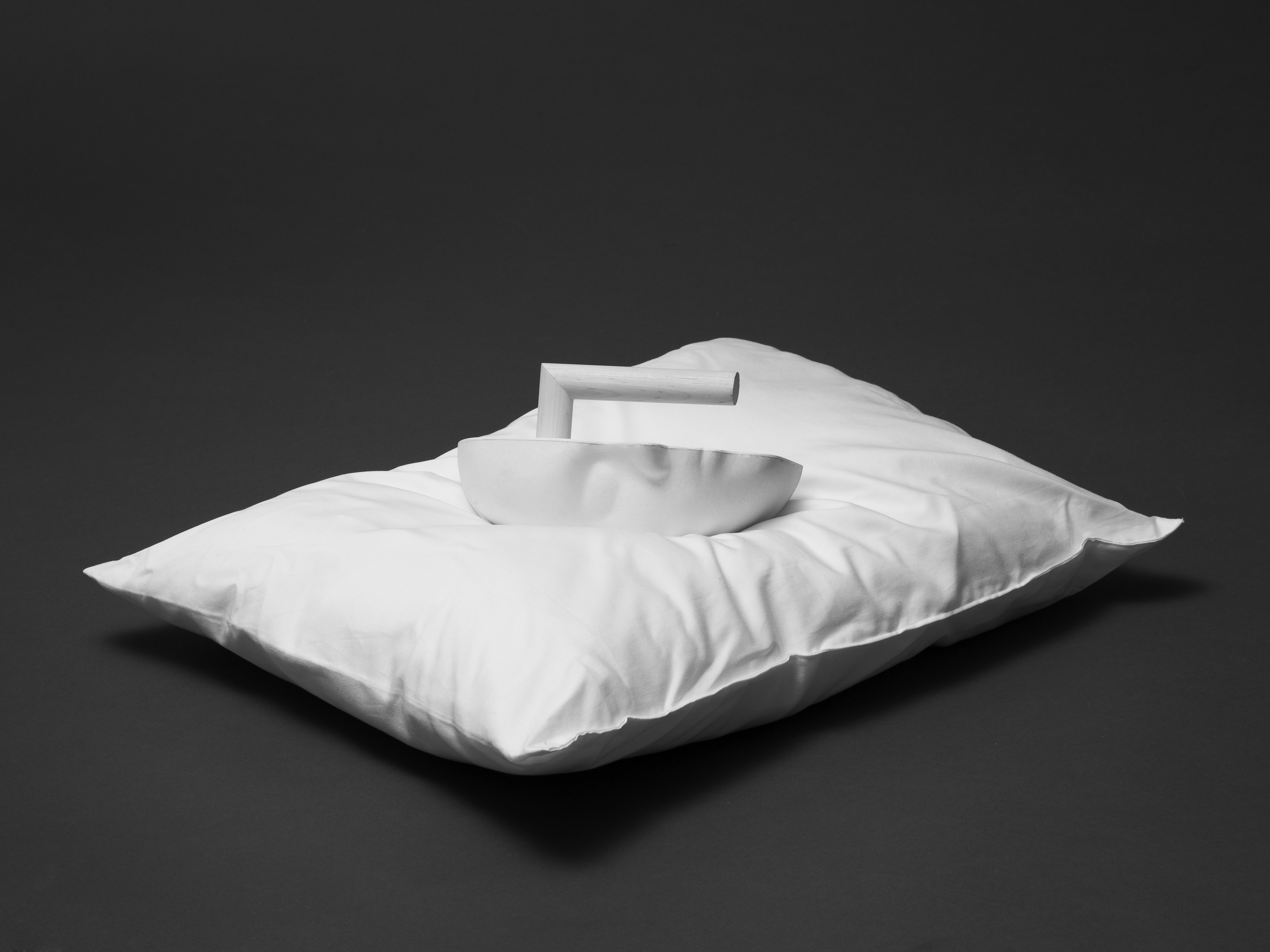 Ambient Traces from The MeMo Organisation project A series of objects and short stories that focus on issues surrounding loss and mourning.
Photo Credit: Jonathan Allen

T: I think we are not very focused on the final object. I think that's possibly seen in the fact that we have not been forthright in getting things out into the world and selling things. That's partly been due to our visa status that’s only just resolved itself in the last few years. We are more interested in whatever the main idea is behind a project than the end result, and the object is just a way of us expressing those ideas. If we remain interested in the ideas, we can often go back and produce another object or spin off in another direction. When I think about practical work, these tables for example [points to Quilt table] I wanted to use this type of stainless steel quilted material. We had a project and a deadline so we produced these pieces of furniture, but that idea of that material and constructing things with it, I’d happily go back given time, and work with that again. Similarly once you've created artifacts for some sort of fictional future, you make one of them for the project and you show that. And it's still nice to inhabit that world and consider what else would these people have? M: There is a sense of you having these different kinds of expressions in these groups or families of things that grow off of these individual topics. There is a sense of continuity in the speculative work, for example the MeMo work does feel like a cousin to the New Survivalism project. You guys are creating spaces that you are circumnavigating and trying to understand.

The Biophotovoltaic Hacktivist kIt from the New Survivalism series. A collection of survival kits commissioned by IKSV for Istanbul Design Biennial in 2014
Photo Credit : Jonathan Allen

J: We are probably still quite young in our practice working together but we know and have worked together millions of times, but maybe we are still trying stuff out or disagreeing with each other. We wrote a proposal the other day and we were trying to articulate it quickly as there was a tight deadline. We were trying to meet each other's expectations of what this proposal would be about and I was trying to be very airy-fairy, speculating on future technologies and Tim was trying to bring it down to fundamentals and explain it practically in terms of how it would work with the technologies we have now. We had this idea of a climate activist factory of production for being a place for people to apply their fear of climate change into the domestic space a bit more. We had this long discussion about difference between what kind of outcomes we wanted to get from this proposal.

T: That is something we have talked a lot about in the past, how we work together. There tends to be this mode where I’m the one thats like “we need to resolve this, what's the practical outcome of this?” and Jess is trying to push it and propose it to be bigger or better or looser.

M: Do you think that is true? I have heard a lot of people say you are logical and experimental, both sides of the coin. I guess the reality is a lot more nuanced. Perhaps it's not so much that these things are in tension but in parallel. It’s trying to find the overlap versus diluting something. 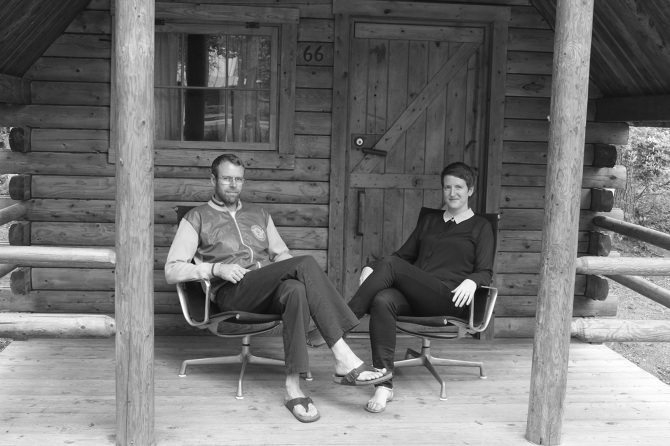 J: I am pissed off when people think we are very different. We are just trying to do work as two different people, but we spend so much time working together that it's hard to separate what we both bring. It's a boring topic. That’s why we are trying to create this macro explanation about what we do.

M: There is a freedom to that, as you can choose the level of your individual selves or combined selves. Now that you have this macro thing you are free to take on projects without feeling you have to approach it a certain way. You do have a hat, it's not a weight, it's more of an aid.

Both Tim and Jess are graduates of the Royal College of Art in London, Jess from Design Interactions and Tim from Design Products. They currently teach in the Department of Architecture, Interior Architecture and Designed Objects at The School of the Art Institute of Chicago (SAIC).

Michael Savona makes work to live around. Founded in 2010, his practice includes housewares, printed matter, visual identities, textiles, websites, and objects. Michael holds a Masters of Design in Designed Objects from the School of the Art Institute of Chicago and a Bachelor of Fine Arts in Printmaking and Sculpture from Alfred University. He is currently based in Chicago.